"Don't let the noise of the opinions of others drown out your own inner voice."

The opening quote is so fitting for such a time as this. 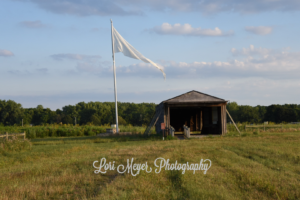 Last weekend Lori, Jordan, and I visited Huffman Prairie where, over a century ago, the Wright Brothers spent countless hours perfecting their flying-machine.

If you’re from Ohio or if you are ever visiting Ohio, you need to check out Huffman Prairie. It is located just outside the grounds of Wright Patterson Air Force Base in Fairborn.

Wright Patt is also home to the National Museum of the U.S. Air Force…another must-see destination in Ohio.

The simple act of standing on the sacred grounds of Huffman Prairie opens up the right/creative side of my brain as I encourage my spirit to relax and absorb the inspirational energy that the Wright Brothers left behind from their tireless work over a century ago.

For Lori, the trip to Huffman Prairie means an opportunity for her to practice her craft as a photographer. There are some great paths that wind through a wild nature preserve bordering the Wright Brothers’ practice field. An added bonus is our neighbor and good friend, Terry Lavy, plants and tends to the beautiful prairie where Lori works her art. (Take a look at some of the amazing photos she captured during our most recent visit by clicking here.)

For Jordan, the trip to Huffman Prairie is simply an adventure and Jordan is always up for a good adventure.

“I used to chat with the Wright Brothers in a friendly way…because I sort of felt sorry for them. They seemed like well-meaning, decent enough young men. Yet there they were–neglecting their business to waste their time day after day on that ridiculous flying-machine. I had an idea that it must worry their father.”  Luther Beard, Dayton Journal writer

I’ve been enthralled with the Wright Brothers and their journey for a number of years and often wondered what drove them to create such an amazing work of machinery that forever changed our world.

I have a feeling it was a voice inside them.

A voice that had no regard for people like Luther Beard.

A voice that wasn’t swayed by the news.

A voice that wasn’t swayed by social media — the letters they most likely received telling them they needed to focus on running their bike shop instead of wasting time inventing a crazy contraption that will do something God only built birds to do.

A voice that wasn’t swayed by fortune, fame, or the number of people who “followed” them.

A voice they simply listened to.

If ever there has been a time to get in touch with your inner voice, it is now.

We all have one and each of them was created by the same Creator. His intent was for us to use them to make the world a better place.

Counter to the above two thoughts is the fact that the enemy will do whatever it can to distort and silence your inner voice and it loves to do its work when the world around us is chaotic.

What are you doing to protect, nourish, and listen to your inner voice?

If you are looking for a place to find it — check out Huffman Prairie.

Romans 15:13, “May the God of hope fill you with all joy and peace in believing, so that by the power of the Holy Spirit you may abound in hope.”

I started this blog in 2008 because of my passion for helping others take their lives to the next level. My hope is that, through sharing my life experiences as a business leader, husband, father, and recovering drug addict, I will positively impact your life.