A couple of days ago, I was in Washington, D.C., visiting our oldest son’s family, which included some quality time with our two granddaughters. What a joy! 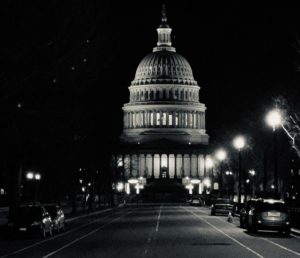 Whenever I’m in Washington, I go on at least one long run and take in the spirit of a city that’s like no other. As much as I dislike the dysfunctional nature of politics and our federal government, I have the utmost respect for our Constitution and what it stands for. The thought of it exudes an aura that leads me to a state of awe and wonderment as it is the soundest document ever penned, or should I say quilled, in the history of the world.

In writing the Constitution, our forefathers created an idea for the protection and benefit of “We the people,” and for the most part, “We the people” have benefited immensely from this idea which has been slowly evolving for almost 250 years.

I got up bright and early on day two of my visit to go on my aforementioned run. I decided to head to the area around the Capitol building and was joined by a gentle snowfall that added a beautiful ambiance to my early morning trek.

As I ran around the Capitol building, my mind drifted to thoughts of our forefathers mapping out where the work of our nation would take place. They were genius in locating the building on a hill that years later would create the first landmark in what today is our iconic National Mall.

Next, I decided to journey down Pennsylvania Avenue.

Shortly after that, I was a bit stunned as I  observed a homeless person tucked inside a blanket on the sidewalk. I few hundred yards later, there was another homeless person. This one had a huge box serving as a shelter over the blanket which covered his body. In front of the Newseum, three more homeless people were lying under benches.

The current fate of these homeless people disturbed me and sucked some air out of my lungs.

Although our great nation has lived with a wonderful idea for almost two and a half centuries, there are still some cracks in the idea, and our homeless brothers and sisters had obviously fallen through them.

I then came upon the National Theatre, and the plaza in front of it was coming to life as crews were setting up news cameras for what looked like a major event. I asked someone who was a member of the event staff what was going on and she replied, “The Women’s March.” I said, “cool,” and kept on running.

About one minute later, I came upon a group of ladies prepping for the March. My disturbed soul from the homeless people lifted remarkably, knowing these women were going to march and protest about issues (I had no clue what the issues were) they were very passionate about and had no need to fear or worry about being arrested or having their voices shut down.

According to Magoumba, my Uber driver that day, our ability to protest safely and speak freely about our beliefs is what makes the U.S. unique and special. Magoumba was from Senegal and is now a proud citizen of our great country.

Since 1776, our forefathers’ idea and “We the people” have come a long way as many positive changes have taken place in order to afford all of us our inalienable rights of Life, Liberty, and the Pursuit of Happiness.

We’ve abolished slavery, and created the 19th amendment to allow women the right to vote. It’s still hard for me to fathom that either of these suppressive practices took place in our great nation.

In 1972, Title IX banned discrimination based on sex in federally funded schools and universities and suddenly young ladies could compete in sports just like their male counterparts.

We are slowly but surely changing health care from a benefit to a human right.

As noted earlier, the Women’s March is gaining traction as it works to dismantle systems of oppression and build inclusive structures for all women. (As noted in their Mission Statement).

These are but a few of the many positive changes which have taken place as our forefathers’ idea has continued to evolve over the years.

Today we celebrate the amazing life of Martin Luther King Jr., who led one of the biggest movements in the history of our country’s idea.

Almost fifty years ago, on August 23, 1963, Martin Luther King Jr. delivered what became known as the “I have a dream speech.” A speech that will forever be engrained in the fabric of the U.S.

King was the driving force behind ending discrimination of people based on race, color, religion, sex, or national origin. After several years of his tireless activism and less than a year after his famous speech, the Civil Rights Act of 1964 was signed into law.

As you can tell, my early morning runs in Washington D.C. most certainly stir my spirit.

We live in the greatest country in the world with an amazing idea that has withstood the test of time and many conflicts along the way.

I am confident more inequities like homelessness will be corrected as our idea continues to evolve.

You can’t go wrong with an idea that was written by its people for its people.

I started this blog in 2008 because of my passion for helping others take their lives to the next level. My hope is that, through sharing my life experiences as a business leader, husband, father, and recovering drug addict, I will positively impact your life.